More progress here on my Assault Marines- i've now got 16 assembled, with 6 base coated and washed, the rest are still sitting around in black undercoat waiting. Once the red + wash goes on i've been painting the raised areas of the collar and small sections you can't get to easily and then gluing the helmet heads in place.

The 6 red amigos so far. Even in base colours they look swanky. The urban bases certainly help!

I'll be very happy once i've got all 30 Jump Marines assembled and red basecoated, even though there'll be quite a lot left to do to get the army completed. Still, continuous progress and getting an hour here and there in is making things happen!

Oh, and I played a game with my mate Alan last weekend, still trying to learn the game. Learnt several valuable lessons here:


﻿﻿ ﻿﻿
﻿ ﻿
I think my own 1500pt list is useable, but I need to work on where I drop my Furioso, and how to deploy and take action with my jump squads. Ive never had a lot of jump troops to use before, so the coordination of three full squads is something i'm yet to work out- maybe some Internet tactic searching will help.

Thats enough for now! Any comments or feedback is welcome as always!
Posted by Tempest at 10:21 PM No comments:

A short update today, as I'm flat out with work...

I've gone a bit crazy with purchases for this BA project, and have recently bought a whole bunch of the new range of GW paints (can we still call them new??), specifically the complete sets of blues I needed for the two Librarians I'll be running, from the dark basecoat through the the topmost highlight, including a wash and glaze as well- 6 pots in total. Im not a fan of mixing colours, so for me just purchasing all the required shades is best, and the glazes seem to tie all the differing colours together. I understand this is not the approach when you're chasing painting awards but consistency across the entire army is my main focus, to that end I wont blend or mix anything.

The stash so far- I am still using older washes like Devlan and Badab, as you'll never know if i swap to the later versions, as their uses in this army are a lot more subtle. I've also continued to use the Boltgun Metal I bought only a few months prior, I havent seen any reason to swap out to Leadbealcher as they look identical to me... 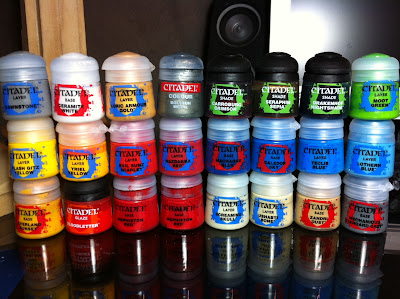 And here's the Librarian after a quick Caledor Sky coat. I've also added a few test sections of Teclis Blue for minor highlights, with Lothern Blue to go on for the final 'reflective' highlighting on the uppermost raised sections. 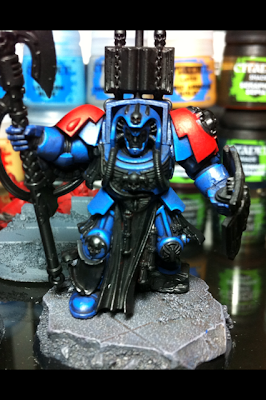 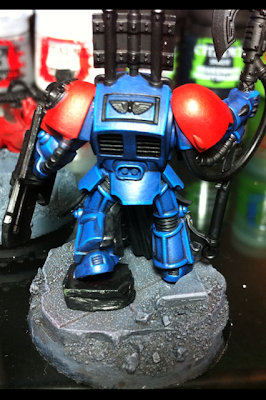 Once his greenstuffed foot pedestal is painted up to match his base he'll really look even better. But happy with the results so far.
Posted by Tempest at 4:11 PM No comments:

Its been a hard slog trying to get any hobby stuff done in the last few weeks- I've had some health issues (which turned out to be nothing in the end) and some very busy weekends socialising and whatnot. But I'm back on the bandwagon now and going to try making a dent in this new endeavour of mine.

Just under a month now to ANUCON, and I'm a bit behind to be honest. Half the Assault Marines are assembled (well, legs torsos and jump packs at least), and have had bases allocated, pins inserted and I've started putting down a lot of Meph red. I've also completed the base coating on the Terminators, the picture below shows the one on the left after reapplying the Mephiston Red again (leaving the Carroburg Crimson wash in the recesses), with the one on the right still just the washed over basecoat. Even at this early stage its starting to look good- Terminators lend themselves to a nice defined paintjob. In this photo the bases are just bare resin. 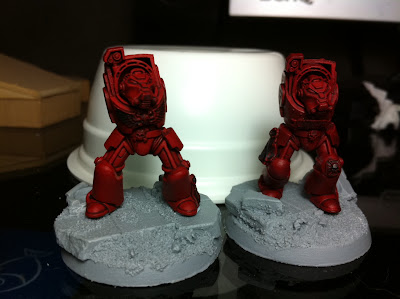 ﻿
And below is a group photo of the squad. In these pics all bases have now been black undercoated, then basecoated with Mechanicus Standard Grey. The very left base was used as a test- i've applied a wash of Agrax Earthshade (Devlan Mud), then drybrushed the Standard Grey back on, and then a highlighting drybrush of Dawnstone (similar to old Codex Grey). The other four are just basecoated only. 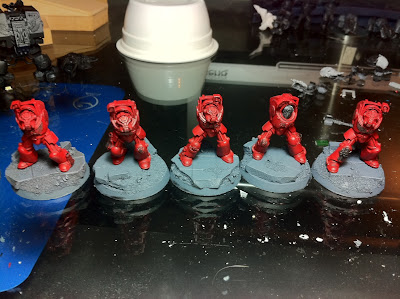 EDIT: Updated pic, the base blue is all laid down now, and I gave him a wash of Drakenhof Nightshade... although, I now realise that both shoulder pads should be red, not just the one (going off the GW Space Hulk paintup anyways). Easily rectified if thats what I choose. I initially wasnt liking this mini from a painting view but I'm slowly warming to him. I think its the colour, I'm not used to blue, yet??

There's also another Librarian on the way who should appear fairly soon, he'll be getting some 'chapter conversions' and a jump pack of some description, and I've been dummy assembling a Sanguinary Priest as well. Whilst some people are declaring that DoA (Descent of Angels) armies to be 'dead in 6th' thats making me all the more adamant to run a jump heavy list- to show that you dont need to drop from the sky to make these lists work.

There's the possibility of some gaming in the next month or so, assuming I have everything at least assembled I'll start trying out my prospective 1500/1850 lists (ANUCON and CANCON respectively).

For the time being this what I'm roughly working with for 1500:

The basic premise is flexibility of delivery- as the Furioso rides in a Drop Pod it's ignored from the unit count for determining reserves (as is the Stormy, as its a Flyer). So with these removed there is seven units in total, which means half (rounding up) of my units can be reserved, which is four. The Terminators and Termy Librarian will almost always be riding in the Stormraven, which still leaves me with two more units I can reserve.

Anyhow, thats enough for now. Hopefully will have more details up soon, assuming I can keep the momentum going!

Posted by Tempest at 4:27 PM No comments: