Scenery- the difference between a good game, and a great game

Okay, so the above is a bit of a opinionated statement but one that I personally think rings true. The scenery pieces and the table they sit upon is what can turn your game of "plastic men shooting each other from behind book piles" to "a bloody encounter between two heavily armed forces on the Imperial Forgeworld of XYZ etc". Simply put, scenery is what sets the scene.

I understand that the above paragraph may have some of you nodding your head in disagreement, but for me the lure of the game is the fact that we arent just rolling dice and using tactics to beat an opponent's forces- there is plenty more simplistic games out there that cover this requirement off without needing the spend the time and effort required for 40K. No, we are creating (or re-creating) a battle in the 41st millenium, in one of the richest sci-fi backgrounds thus created, so I feel that games should strive to be as immersive as possible- you aren't just looming over the table all god-like and omnipotent, you are down there with the men at ground level, seeing whats going on. And at eye level, thats when you want to see the nice stuff.

Whilst I can forgive unpainted minis (or even just base-coated/undercoated), a lack of simple terrain is a no-no for me. It really takes no time, effort or expenditure to cut out some different size carboard into boxes and glue together to create buildings. Or, to glue some cheap aquarium plants to a rounded wooden base to make clumps of vegetation. I've used both of the above examples to create terrain for my own games and
they help to set the scene.

Speaking of setting the scene, i went to a 3 per side team game last weekend at a friend's place. Whilst the majority of his terrain and scenery is GW store-bought, some pieces like the landing pad were scratchbuilt- all of them were fully painted and detailed though, and it was great. Playing on a table with flocked grasslands on one side and cratered wastelands on the other was great- we augmented this with some of my hills, trees and buildings that i brought along. We also had an Ork settlement in one corner, the aforementioned landing pad as our central objective and a river running through the green side of the board- this all added up to a great setting for our battle.

The game specifics were 1200pts per player, and comprised of "team evil" with the Deathskull Orks (Me), Goff Orks (Adam) and Daemons (Colin). "Team Good" was comprised of Salamanders (Ash), Grey Knights (Brendan) and Imperial Guard (Claire). Although the first few turns were decidedly in Team Evil's favour, it balanced out in the end with one objective a piece and the last one contested. Was a hugely enjoyable game, with no hassles, no powergaming and no arguements. Playing 40K on a table like this, with beautiful themed terrain pieces-thats what the hobby is about for me.


The board- nice terrain and tertured game surface pieces!

Da Boss decides to prune some trees, as well as the Salamanders camped in them...

The Battlewagon drove up the river the whole game, ploughing onwards with its reinforced ram!

Due to several tournaments looming i’ve decided to get moving quickly on my Orks. I’ve settled on the “Deathskulls” clan colours, which is a blue paintup of  the face/arm/hand/ random clothing of weapon, this appears to borrow from the Scots as immortalised in the film “Braveheart”. It doesn’t hurt that the original concept for the Orks was as a “rabble of wild warriors” as based on the historic Scottish Clansmen, so this colour and theme works extremely well. I also ran with this clan as I came up with an effective paintscheme for armour and vehicles.
The following is the process I used for all the blue that isn’t painted onto Ork skin. It appears convoluted, but once i got it sorted out it was very quick and easy- washes and drybrushing speed everything up.
Basecoat: Chaos Black Spray (Always!!!!) > single, even coating of Hawk Turquoise> thinned, watered down Blazing Orange (1:1 water to paint) run along all panel joins, dabbed around rivets etc > very light drybrush of Boltgun Metal> wash of Devlan Mud > stipple Hawk Turquoise back onto middle sections of armour, leaving rusty/washed/metal areas near the edges of the panel. The close ups of the Killa Kanz shows the end result best.

The Orks themselves had the blue painted onto their skin randomly, this will be washed over soon with Devlan Mud and then (like the skin) re-highlighted with the same blue again. Simple but striking!

The Battlewagon and Looted Wagon have both turned out great, the Looted Wagon actually exceeding my expectations- the welded on metal struts and spikes have given it a really Orky feel that I’m happy with. The big bad “boomgun” needs painting up and im thinking of throwing some razorwire around it, but aside from that its done.

My next post will be up soon as well, will be my new urban ruins terrain pieces- check in the next few days for an update!  (I figure that being a terrain and Minatures blog I should actually put some terrain up hey...)
Comments most welcome!
Posted by Tempest at 6:55 PM No comments:

The Beginnings of my Waaagh!

Over the last year or so I've traded and bought a huge stack of Assault on Black Reach Ork minis with the intention of launching a Waaagh with which to a) amuse myself with, as Orks can be crazy and random, b)paint something different to power armour (but still green hey!) and c)inject a new faction into my current gaming group.

Getting back to 'da ladz',for a really small outlay I had myself a decent foot army and some Deffkoptas as well. However, the bug has bitten hard- Gork AND Mork spoke to me and demanded more units! So the lads have now been backed up by 3 Killa Kanz, 2 Looted Wagons, 2 Battlewagons and a Stompa super heavy walker! As a pure wysiwyg army it'll start around 3000 pts but could easily top 4500 without overloading on wargear and losing unit cost effectiveness. Big thanks to James, Ash and Alan for the AoBR kits, and Chris (chopshopbitz on eBay) for the Battlewagons and Stompa.

Now to find the time to paint all 123 models (101 of those are footsoldiers!). Oh, and I finally decided that my Orks will be the thieving looting opportunistic types, and are being painted up as Deathskulls. Every other Ork army I come across seems to be Goffs or Bad Moonz, and i have a vibrant 'blue' tone that really pops out against green skin.

Time to stock up on greens, blues, washes and dirty, metallic and rusty colours....

Some Pics!
Almost the whole collection- still have to assemble another 10 boyz, another Battlewagon and the Stompa...

One of the Battlewagons (rear canopy and all turrets are removable). Will be getting a Dethrolla for the front really soon.

﻿So there we go- the Waaagh is well and truly on the way!! Im going to be crafting a 1500pt list from the models i have here in time for a tournament in late September, and im hoping to have the majority of these guys painted up in time, even if only base colours with some washes and highlights. Going to run 2 Battlewagons, the Kanz, a couple of Koptas and as many Boyz as i can fit in with the points limit....
Posted by Tempest at 7:47 AM No comments:

Email ThisBlogThis!Share to TwitterShare to FacebookShare to Pinterest
Labels: orks

Welcome one and all :)

A big hello to anyone reading this, thanks for stopping in and having a look here. My blog will be updated as regularly as i can manage and will cover off the goings on of my hobby life, including painting updates, terrain builds, commision pieces and other work from the workbench.

I'll also be reviewing products as i come across them, highlighting older GW minis and putting up tips and tricks that people may find useful. As well as all this you may see the odd battle report appear as well.

Im looking forward to developing this blog as on ongoing chronicle of my gaming exploits, and i hope you'll keep watching and replying as the updates roll on.

So without further ado, let me introduce you to my Dark Angels. This army has been in the build (on and off) for around 4 years now. All the power armoured squads in the army use the Dark Angel Veteran bodies, so they are all robed- my army represents a specialist strike force of the most senior brother-marines, assembled from across the Chapter itself. I've also included several modified miniatures for my Captains- a chopped and changed AoBR model now has a Mk6 corvus head, different arms and a Sanguinary Guard jump pack and wings, and the other Captain is a Terminator with chapter-symbol leg greaves, custom built shoulder plates and Sanguinary Guard wings as well- he represents the legendary Deathwing Master Belial.

Alongside the foot models are my three Rhinos, Predator and Land Raider. Each features freehand chapter symbols, stylised and modified to some degree. Im especially proud of the Rhinos, they all appear to look like facsimiles of each other which was no mean feat! 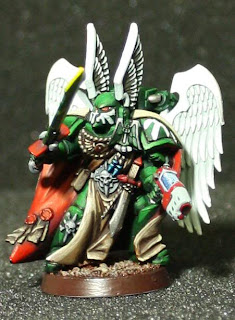 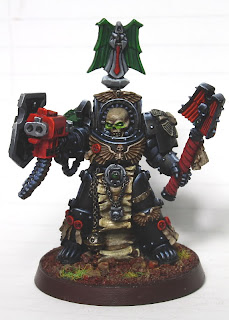 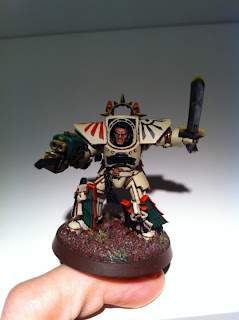 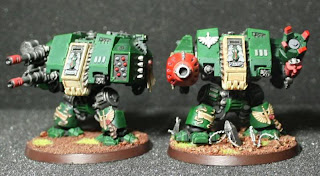 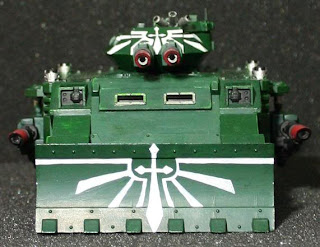 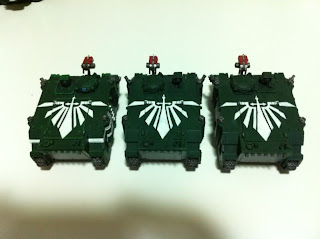 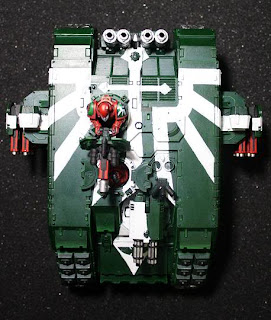