Wow, talk about being busy! I've had nearly no time to sit down and paint or do anything hobby related since the week before the last big Apoc game as we've been getting stuck into some major home renovations and landscaping upgrades. While this is all well and good it does mean that I've felt bad about neglecting the hobby, and in turn my Blog. I'm hoping to pick up the pace again over the Xmas-New Year's break as i'm not going anywhere or doing anything major, so unless something appears straight out of left field then I should get some more painting and posts completed.

so, on to the topic at hand. I was trawling through a few of my favourite 40K-centric forums the other day and saw that entries for the Second Sphere Heavy Support contest was ending very soon. With my Deathskull Orks recently base coloured I thought it might be best to complete one of the mini/s from their as a submission, however there was a few issues...

The first was time- i'd glanced at this contest ageeeees ago when the rules and details were first put up online, and in the back of my mind had locked in the 22nd of December as the submission deadline. Lucky I looked at the rules post again, because the submission date was actually the 21st, with the voting starting from the 22nd! So I was trying to complete my entry on the last day for submissions to be accepted!! I wish I could say this was the only time this has happened but I'd be lying through my teeth. However, as history shows this is usually when I'm at my most productive- nothing like a looming deadline to get tasks out of the way!!

The second issue I had was with choice- in my current Ork army I have 3 Killa Kans, 2 Battlewagons and a Looted Wagon (with Boomgun) as possible HS choices, all of which were done up in their base colouring- Hawk Turquoise blue, Devlan Mud washed, Boltgun Metal drybrushed, with a nice Blazing orange "rust effect", with random white checks and dags. But which of these to do up?

With all my painting done, it was time to get some photos. Some people like to photograph outside in natural light, but if you're like me then you'll want more control- for this reason I use what is commonly referred to as a 'light box". Put simply, a lightbox is a box (OMG no way!) with a bright colour on some or all of its internal walls to reflect light around the object placed in the middle of the box. My lightbox is a carboard carton originally used to hold reams of A4 printer paper- i've cut one side out so its now two side walls, a back wall and floor, all of which have had white A4 paper glued into place. I've then used a pure white energy saving globe (i've found these to provide excellect illumination with almost no colour distortion) positioned just above the camera that i've used for the photos. As for that Camera? Its simply just my iPhone 4 camera sitting on a small wooden block, with the "HDR" photo setting turned on. All I do is get some focus on the model, move the light source around until i'm happy with what I see and start snapping off shots- sometimes the HDR gives better detail shots, other times it might wash some colour out, so it gives two photo versions to select from.

Anyhow, less talk more pics- here's the comp entry photos that I ran with.  You may note that I painted a small 'kill marking' on the turret, as the Looted Wagon has so far been able to destroy a Leman Russ Battletank (a few months back at ANUCON), I thought it only fitting that the crew would mark this somewhere. Its not exactly Orky in how it looks but I reckon it looks cool!

I love how the triangular dags on the turret blastshielding look three-dimensional, even though its just painted on.

A closeup of the turret, showing the Killa Kan "pogo" legs that I used as recoil suppressors.

The competition entry thread will be up a day or two's time (competition committee are generally all UK-Europe based), so make sure to have a look and cast a vote if something takes your fancy!
Thanks for looking!
Tempest :)

Posted by Tempest at 6:12 PM No comments:

Deathknell Orbital Strikeforce teleports and drops in after a massive lance strike to clear the ground.

Da Ladz suss out the competition, but ultimately decide to go Daemon bashing!

Necrons and Chaos deploy after being initially delayed.

Abbadon declares his intentions to all and sundry, presses the big red button and the Doomsday Device powers up! The Bloodthirster appears impressed!

New-codex scarabs vs Baneblade- 600VPs to the small metal swarm after eating the superheavy to pieces.

The Greentide about to crash into the Daemons, with the two Stompas hosing everything with their Supa Gatlers

Flyers strike deep behind our lines

the Kan decides to destroy a Drop pod as a last act of defiance before the Terminator's crush it to bits! (My flaming wreckage markers worked so good- flickering LED candle hot-glued inside pillow stuffing, with black spray on the outside!)

The stompa scythes the Chaos Baneblade "Storm Of Chaos" into ruin!

The Bloodcrushers are assaulted by the Dark Angels and a small unit of Stormboyz, whilst the Wraithlords and Deff Dread advance on the Doomsday Device.

The Assault Marines, Dark Angel Lords and Deathwing plan their next move.

The Marauder finally appears, weaving through the smoke-filled skies to deliver a huge payload to the Necrons and Daemons below. The very left flaming wreckage is the remains of the Linebreaker squadron.

The raw numbers...
And a couple of graphs showing the end VP results- the battle for MVP on the other team went down to the wire and was only won by Alan by a margin of 39 points!! And its obvious to see why my team won this battle- the Orks came storming out of the gate from the start and kept pouring on the death, culminating in a massive 1700+ VPs haul on the third turn alone (which is more than my Dark Angels scored all day!) 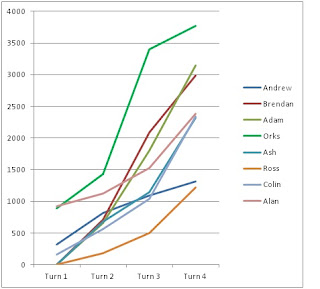 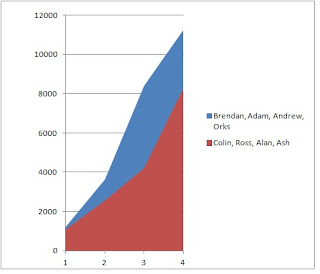 So what next?
Well, seeing how a lot of people are going to be tied up over the next 4-6 weeks with Christmas, New Years and things like Cancon its looking unlikely that there will be another Apoc until at least mid- to - late February. This in itself isnt a bad thing, as a few more people should be available to participate in the next game, and the returning players should have that extra time to complete new units or paint up what they have. It also gives me some time to build a nice shiny centrepiece terrain structure for the next game, i'm thinking of a large Manufactorum or Ork Fortress.
Posted by Tempest at 4:32 PM No comments: