Today is just a short and simple update- I tend to carry on way too much in general...


With my Blood Angels I've started work on a new scheme that only uses the current range of GW paints, with no reliance on older colours. Woe betide the painter who gets halfway through an army and runs out of their core colour...
The following is a sequence of shots of a Tactical Marine I had lying around in black undercoat. I was originally going to buy an army painter spray and work with that, but now im thinking that I can get this to work instead, and to be honest i'd prefer not having to go back and black out all the weapons on 30+ assault marines... 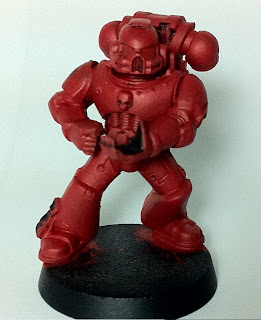 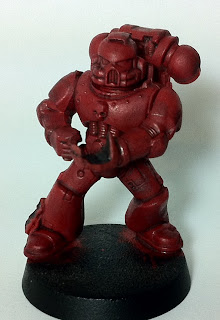 Reapply a coat (or two) of Mephiston Red, avoiding the recessed areas. 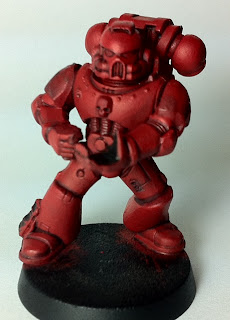 Apply two thinned down coats of Evil Sunz Scarlet on all the major sections of armour, leaving sections of shading and darker red at joints and hard edges.

Add this stage I add a highlight of Fire Dragon's Bright, which is a thin colour and gives a orange/peachy type highlight colour. And most importantly- two coats of Bloodletter (Glaze)- this smooths out the transitions between  all the previous steps as well as bringing the hue up to a richer red more in keeping with the boys from Baal.

Final step is to revisit the Dragon's Bright Orange highlights, and i've (roughly) painted in the eyes, armour joints etc for some more detail. But all in all, this is my Blood Angels will be painted. And all with straight-from-the-pot new colours, no mixing for me :)

Oh, and here's my next challenge- My new HQ unit- a 'Space Hulk' Librarian in Terminator Armour. I've removed his Stormbolter and given him a Storm Shield for some big time defensive ability. I've also freed him from his standard 'base', save a section of the step/pedestal under his back foot- this will be suitably disguised to blend into his new base (and more on that soon).

Comments and feedback are always welcome!