Hey everyone! I'm back now from Wintercon, held here at EPIC in Canberra, after a two-day, five battle odyssey! There were highs, there were lows, and even some middle ground, but all in all I got to roll dice, meet new people and have a great time so nothing to really complain about (aside from having a cold).

Wintercon itself was reduced from three days down to two- although the 40K side of it has always just been a two-day event- however this year the second day was only five games (instead of six), meaning that the second day was a lot more relaxed and we were able to get away relatively early- important when you have a young family as I do. As I'd previously sold off my terrain (well, most of it) as well as my Blood Angels I wasn't really intending to go along anymore, however about 3 weeks out from the event I thought it might be worth a go. Cancon had kind of burnt me out a bit and left a bad taste (Im still not entirely sure why), so I thought that Wintercon might be worth attending to see if it could rekindle some of the love I have for tournament play.

To that end I pulled out what I had of the Dark Angels that werent in pieces/ in the Simple Green and tried to build a decent list that I could semi-complete in time for the 'con. Settled on the list below, based on what I had and what I could build in the time beforehand.

Sadly, in the last couple of weeks before Wintercon I came down with some fairly nasty flu and bronchitis type symptoms, which was further compounded when all my coughing strained a muscle group near my T5 vertebrae- so it was a solid couple of weeks off work on painkillers, antibiotics, throat lozenges, gargles, heat and cold alternating and so-on. At the very least I was able to piece together a five man Devastator unit, a ten strong Tactical squad and complete the base colours on these and my newly constructed Deathwing unit (hybrid of regular terminator box parts and the flash new DW Command arms/torsos/extra bits). If given enough time I would have presented a much nicer looking army but it wasnt to be. Alas...

Anyhow, on to the battles!!

We were basically chasing down control of 6 objective markers, each worth 3 VPs. Antonio set up first, and I failed to seize.


Result: Disastrous Defeat to me (tabled)

Lengthways boards arent the best for my army, which is mainly subdivided into green/white/black portions all designed to work together at close quarters- this was going to be a long table shooting gallery, so I was forced to get up in the Eldar/DE's face to try and get into close range..


Result: Disastrous Defeat to me  (not really unexpected- vehicle heavy list with insane firepower and range. And twinlinked everything, and so on etc etc. On a lengthways board...). Tabled!

Vanguard Strike saw us deployed diagonal with a 24" no mans land strip up the middle- straight heads up kill-or-be killed here with VPs per unit destroyed- I decided to play it safe and start with all my DW on the board and to lay in fire while the Daemons came to me...

This game saw Evan and I on Eddie’s beautiful modular-style city board. Once the markers were placed face down and deployment was done I infiltrated my Scouts to the middle of the board, in the canal that ran up the centre, giving them lots of nice cover (3+ with their camo cloaks). Evan had won the roll for first deployment/ turn and I didn’t attempt to seize. The markers when turned upwards were quite in my favour- I had the ‘4’ in my deployment zone, a ‘3’ was on the bridge close by, a ‘2’ right next to my scouts and the remaining 1, 2 and 3 were closer to Evan’s line.

Result: Victorious Slaughter to me, all secondaries acheived.

This was to be a meatgrinder of epic proportions- Ben's crazed and Fearless Khorne Bezerker army vs my implaccable Dark Angels- straight up VPs (+ secondaries) for units destroyed. I decided to keep the DW shooty units in reserve till turn two, to give them the best chance to land behind Ben's lines and draw his army in two separate directions...

Result: Solid Victory for me 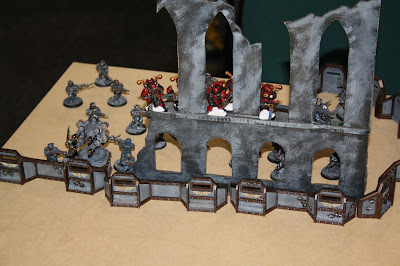 Pics from the tourney 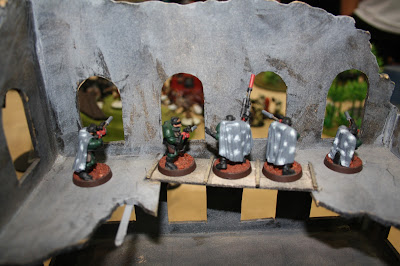 Game 1 VS Antonio's Chaos Marines with IG allies- the traitors are holed up behind their Aegis defence lines. 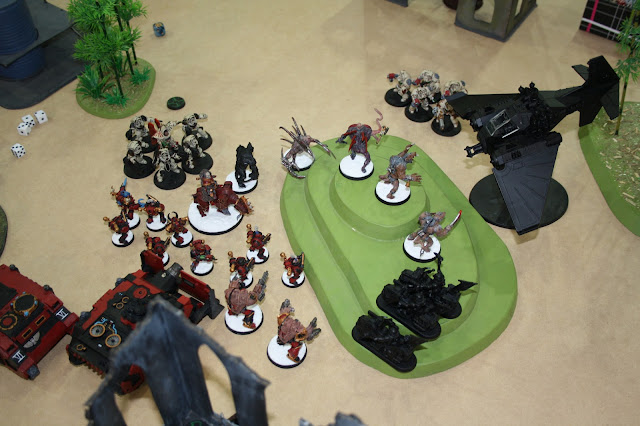 Maiden runs for the Dark Talon and Black Knights, both very promising! 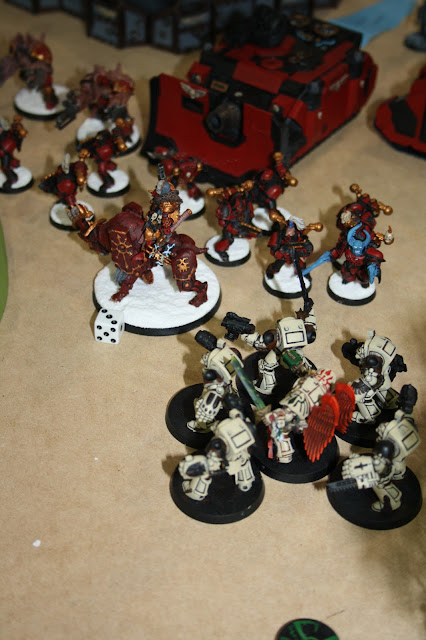 Belial and his DW associates, making friends 'the DA-way'. The cowardly Khorne Lord backed away instead of stepping up for a fight!

(He was back down to T4, and WS/ -1 Initiative though- Ravenwing de-buff attacks!) 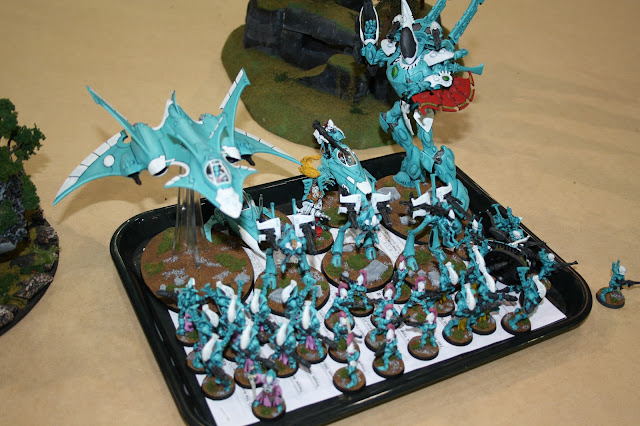 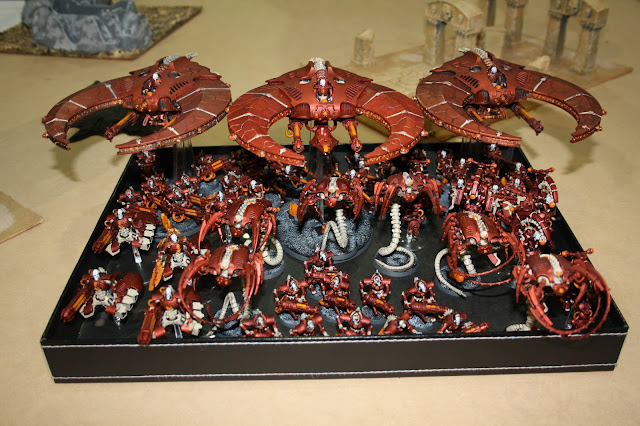 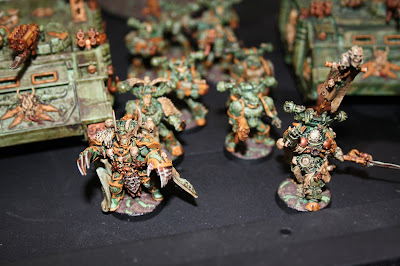 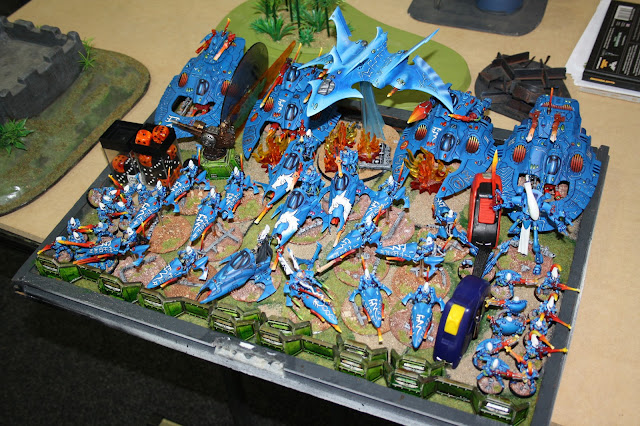 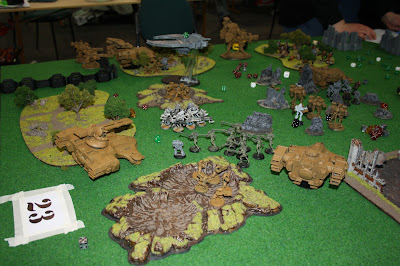 Necrons and Tau do battle over a verdant green battlefield. 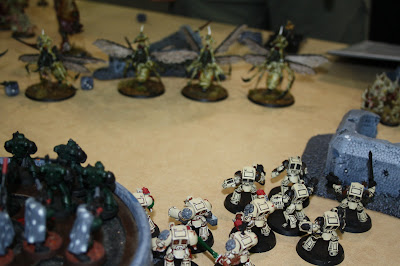 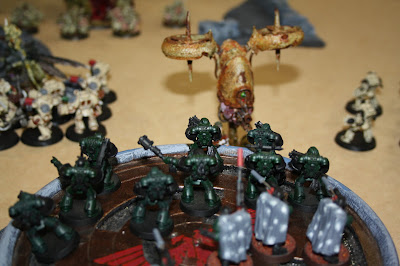 One of the Plague Drones swoops in opening fire on the Tac Squad and Scouts. Despite many casualities they hold firm. 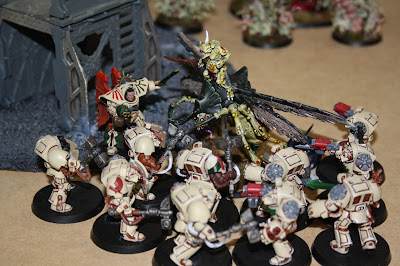 The last Plague Fly is cut down by the swarm of DW termies. 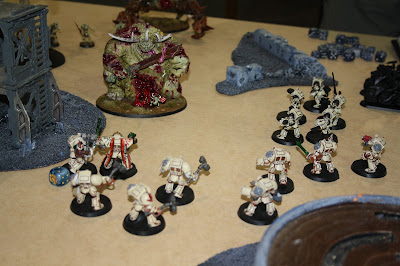 A bigger challenge prersents itself- so long Belial! 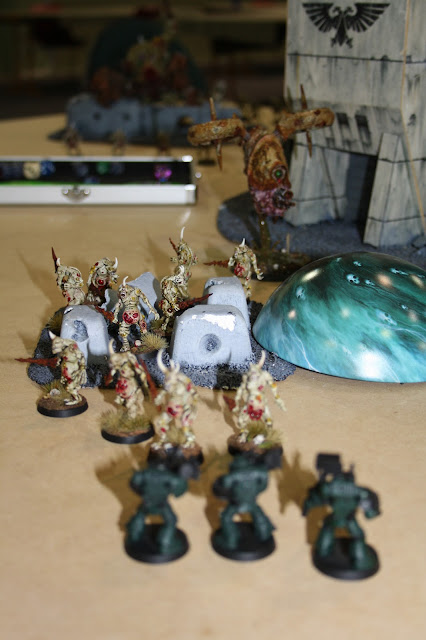 Plaguebearers come swarming out of the maelstrom to threaten the Devastators. 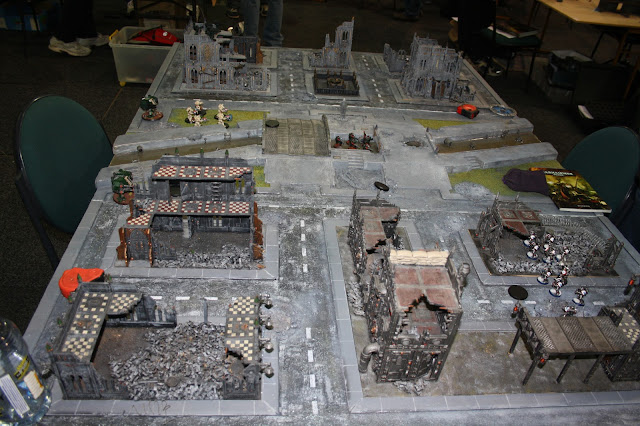 Eddie's semi-modular urban terrain board- a joy to game on. 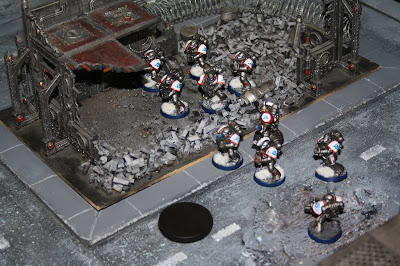 Evan's Iron Snakes deploy near one of the mystery objectives. 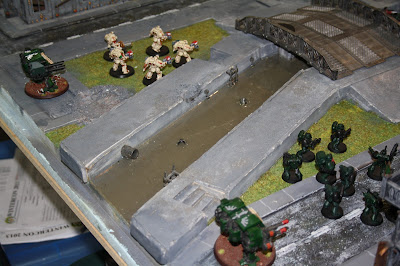 The Dark Angels amass on either side of the bridge, which has an objective marker. 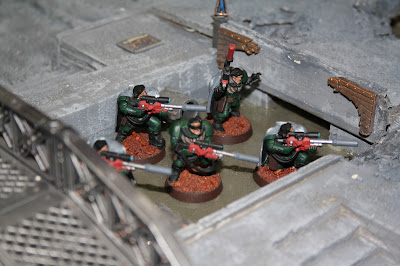 The Scouts infiltrated up the canal in some nice and solid, if somewhat murky, cover. 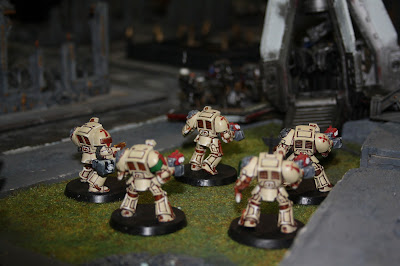 A Drop Pod full of Tacticals slams down in front of the Deathwing on the left side of the canal- they pour fire into the squad and then kill all but two in close combat- the survivors retreat. 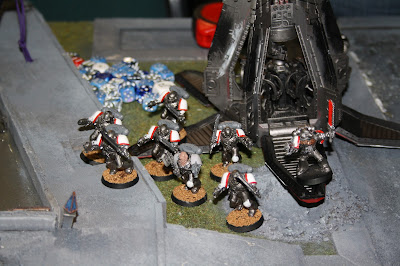 An Assault Squad pours out of their drop pod near Evan's deployment zone, seeking vengeance. 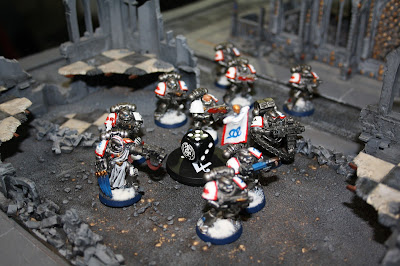 Tacticals hold an objective which is giving them a 3+ cover save (shield generator). 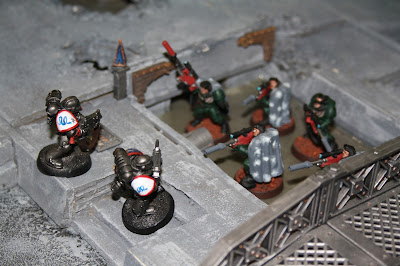 Survivor's of the Deathwing's attack, these Tactical Marines rally and assault the Scouts in the Canal. One scout lands an overwatch hit but it glances off harmlessly. 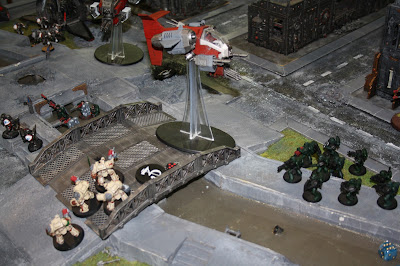 The Iron Snakes Stormtalons unleash on the Dark Angels, evading the storm of fire from the Dreads and Devastators 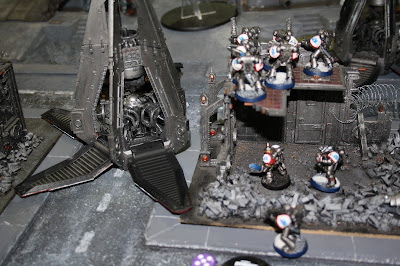 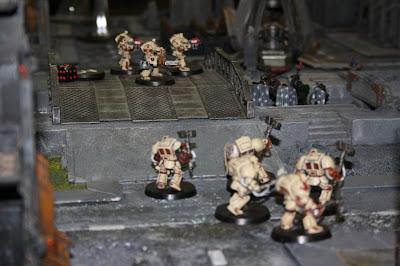 The hammernators Deepstrike in and set about creating a defensive line to protect the objective behind them. The DW squad on the bridge kept split-firing at the Drop pods and Stormtalons but didnt achieve anything. 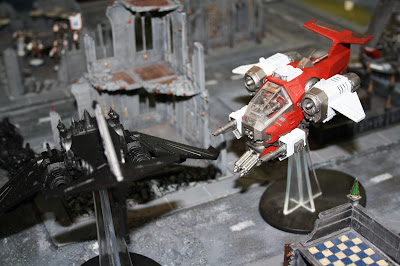 The Ravenwing Black Knights and Dark Talon launch a furious attack on the Iron Snakes Tactical squad but the DT is shot at by the Stormtalon, luckily all the shots pinged off its armour. 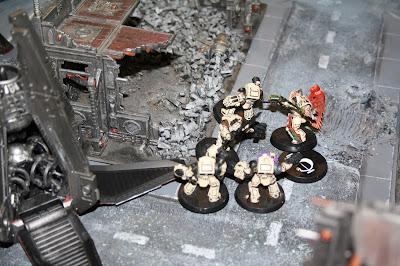 Belial and the Deathwing consolidate onto the '3' objective after wiping out the squad that held it in close combat. 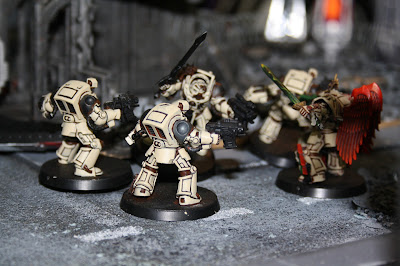 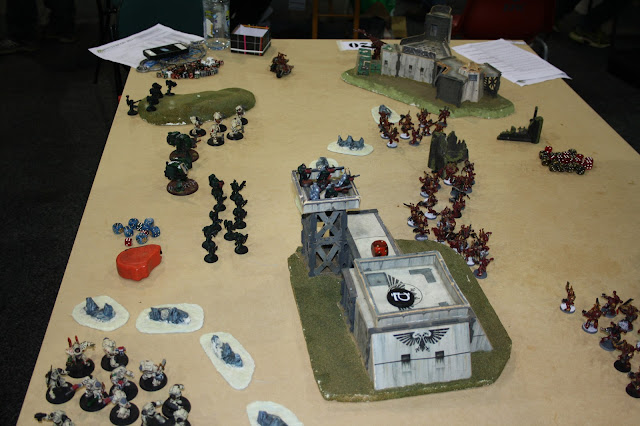 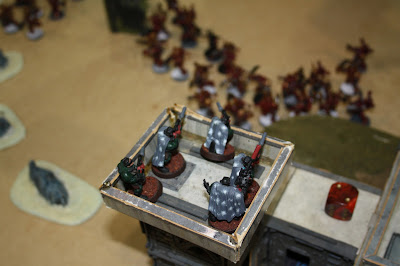 The Snipers throw shots into the approaching horde.

Unfortunately I didnt get any more photos of this game (or any of game three!), but I hope you like whats up here :)

Next post will be up really soon, with a detailed analysis of how each unit performed, ideas for next time, etc!


Cheers,
Tempest
Posted by Tempest at 5:22 AM